Everything you need to know about the chemex

Those are just some of what might be said about this sleek little glass container. Made in 1941 by the eclectic chemist Dr. Peter Schlumbohm the Chemex has been given awards and used by what I can only assume to be thousands of people around the world. A coffee brewing solution derived from his experience with lab utensils made for borosilicate glass.

Borosilicate glass contains boron oxide that reduces the amount of thermal expansion and contraction. This means pouring hot coffee and then cold water to rinse a piece of borosilicate glass will, under normal circumstances, not crack or break the glass. This characteristic lends itself very well to lab equipment, but also coffee brewing. I love to be able to rinse my Chemex right after making coffee in it and not having to worry about breaking it.

Starting at the Top

Not only is the Chemex sturdy, but Dr. Schlumbohm ( I'll just refer to him as Dr. S from here on out) also wanted to make it functional.

One piece of kitchenware that brewed coffee, but also held coffee. Starting at the top of the Chemex is the first, smaller funnel this is where the coffee and filter go. If you have looked at a Chemex or see in the picture you might have noticed the canal or vein the runs from the top and down into the center of the funnel.

Not only does this help keep the filter from sealing off when brewing the coffee, but also allows coffee to be poured out when you are ready to drink. At first, I thought pouring coffee out of the Chemex would be awkward due to its hourglass shape, like there would be a tipping point and a big rush of coffee would come spilling out, but it is super satisfying to pour coffee from due to this design feature.

Then we get to the middle of the hourglass, the signature wooden collar placed around the thinnest portion of where two funnels connect.

This is not only a nice accent piece when paired with the curves of the glass but also serves as a place to grip the Chemex when it is hot. The small leather strap and bead are also meant to aid in gripping and controlling the piece when pouring, although I think it's more for looks.

Although as my fiancé has pointed out it is hard for her to get a good grip, especially when it is full of coffee.

All the Way Down

Then, the bottom, where all the roasty goodness is stored after it travels its short journey through the ground beans and into the carafe.

This is the spot where you can watch the dark silky liquid drip and collect into a pool of satisfaction. If you look very closely at this portion you may see that there is a little glass bump, some people call it a nipple.

What the heck is that? Dr. S wanted to make this as functional as possible. This little bump marks the half-full mark on the Chemex. So the standard three-cup model would denote 1.5 cups. Although most people measure cups of coffee at 6 or 8oz Dr. S measures it at 5oz. So the three-cup Chemex only brews 15oz of coffee. A little weird, but that's how Dr. S saw things...a little weird, a little different.

Donates to our National and Local Parks 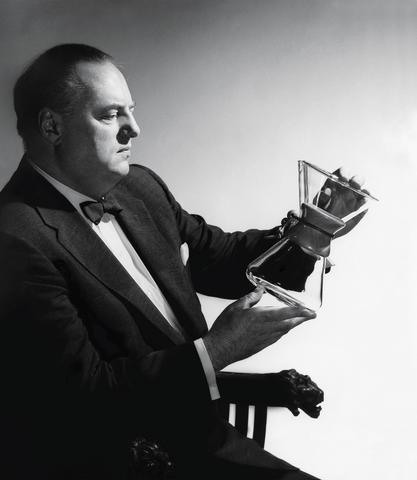 He saw a lot of different items differently than most. Dr. S was the father of over 300 patents. He created and recreated products his entire life, always keeping functionality at the forefront. At his eulogy, a friend, speaking about his designs said they were always created with, "a synthesis of logic and madness".

Born in Kiel, Germany on July 10th, 1896 to a father who manufactured paints Dr. S would spend his childhood here. Shortly after graduating high school, he would be conscripted into the German army as an artillery brigade captain. Not too thrilled about the warring ways he dove into education when his consignment at the army was over with. He wanted to dedicate himself to finding the cause of war so it would never happen again. After a year of attending college and he would be quoted in a local magazine calling for the abolition of the military.

Not only did stopping the terror of war interest him, but he found himself drawn to chemistry. By the end of his education, he had received a doctorate in Chemistry from the University of Berlin. This was probably around the mid-1920s.

/LIVING IN AN INVENTORS PARADISE

After receiving his degree Dr. S started tinkering with designs for everyday items.

His first designs, one of them being a vacuum bottle sold to the American Thermos Bottle Company for $7,000. These first sales fueled his lifelong drive for creating and solving problems in everyday items.

Later, he would relocate to the US, attracted by his success and the patent laws the secured his inventions as his own. While living in America he would improve refrigeration units, and actually be quoted as saying, “Our civilization is a function of the degree of vacuum man can produce industrially,”

A serendipitous happening. His product was almost stopped by wartime efforts, almost like he desired to stop war when first leaving the military. After gaining approval for manufacturing the Chemex was an instant hit fitting, or maybe even setting, the style for the times. Simple and functional, the American people loved it. From there on out the Chemex has received little to no changes in its design.

After coining at least 26 patents in refrigeration throughout 1929 and 1941 he would move from keeping things chilly to the hot delicious beverage of coffee.

Trading the spout for the vein in the top funnel that is used today. The spoutless design not only included the vein, but the nipple, and vent. After gaining interest from Macy's Dr. S in 1942, Dr. S would have to submit his product to the War Production Board due to all manufacturing being focused on the war efforts.

The first design of the Chemex had a handle and spout, unlike the current design. Not really meant for brewing coffee, but filtering mixtures in the lab. Only after the formation of The Chemex Company in 1939 was Dr. S working on a spoutless design. 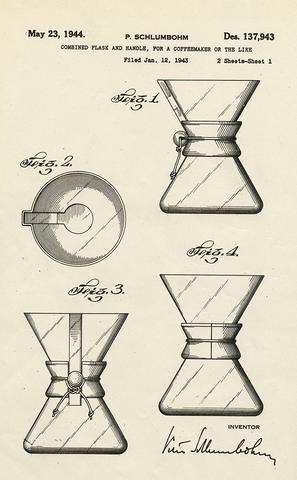 Ready to try the best coffee?

Artisan Coffee, Roasted to Order, Shipped to You

Donates to our National and Local Parks

The design has been so popular that it has won multiple awards from the science and art community, and has even been displayed in The Museum of Modern Arts. A timeless piece of coffee making. History in a bottle, beauty in its curves, deliciousness held for us to enjoy.

My personal experience so far from owning The Chemex for a few days now has been overall positive.  I find it brews an acceptable cup of coffee.

I have used two different brewing methods.  The first being the Kasuya, or 4 - 6 method.  I start with two pours and finish with two large pours.  This makes a very smooth cup of coffee.

The other method I have tried is the center pour.  I first bloom the grounds, wait about 45 seconds, then I pour in concentric circles wetting all the grounds.  Once fully wet, I move my spout to the center of the funnel and slowly, yet keeping the stream continual as to not cause too much disturbance and in turn over-extraction, pour the entirety of my kettle in once pour.  I've found this method makes a much stronger, more acidic, and punchy cup of coffee. I will be trying out 5 pours and 6 pours in the Kasuya method soon and hope to report back. Stand Out & Be Bold

100% safe & secure checkout
Orders will be processed in USD.